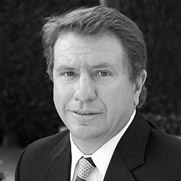 Terry has played an integral role in the brokerage and advisory of some of the largest residential land transactions in California. In the last 12 months, he has closed over $600 million dollars in total consideration. Terry’s accomplishments are not only known within California, but across the United States; he spearheaded the sale of Lehman Brothers’ western region residential land portfolio, which included 19 assets that represented 37,000 total residential units over 20,000 acres.

Terry’s professionalism and ambition is inherent and has been the driver behind his legendary career, earning him the firm’s prestigious P.A.R.K award in 2011 by his Land Advisors’ colleagues for his professionalism, ambition, knowledge, and respectability. Terry’s exemplary career is one that cannot be duplicated and one that is built from years of dedication to the craft and lifestyle of real estate.